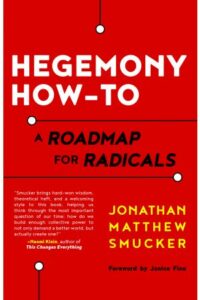 On January 7th we had the first meeting of our Hegemony How-To reading group. In the last years many of us have stumbled upon this book during our political work, partly as members of DiEM25. Few of us are associated with DiEM25 anymore, but all of us want to learn how to improve our organising skills and understand what went wrong with political organising in the past.

We began the session with a brief summary of the first chapter „Political Orphans“. In this chapter Jonathan Matthew Smucker (referred to as JMS in the following passages) gives us a brief introduction of himself, his socialization as an organizer and political active person. Far from being a ‚red diaper baby‘ – as he puts it – he left home with 17 years to hitchhike ‚from Pennsylvania up into New England, and then across the Midwest‘. There in the American wilderness he had some kind of a religious epiphany that helped him to connect his christian beliefs with the social justice issues he encountered during his travels. After his return he held his first speech at Lancaster Mennonite High School as a mini-worship service talking about exploitation, sweatshops, union-busting and other issues. Other than he expected a lot of students and teachers were able to connect to his speech and it caused a lot of debates.

JMS writes that at this point he realized that he had misunderstood himself as one of the ‚righteous few‘, when indeed the dominant beliefs in his community wasn’t as he expected them to be. Social justice values have been always all around him. This insight was later confirmed by a passage by Paulo Freire that he recites:

„Sometimes, in our uncritical understanding of the nature of the struggle, we can be led to believe that all the everyday life of the people is a mere reproduction of the dominant ideology. But it is not. There will always be something of the dominant ideology in the cultural expressions of the people, but there is also in contradiction to it the signs of resistance—in the language, in music, in food preferences, in popular religion, in their understanding of the world.“

Nevertheless he began to feel like a ‚political orphan‘ and eventually left to Washington DC for some years of political protest and civil disobedience about almost every political issue he came across. While this led to an increasing sense of political agency he couldn’t help to see how all of his actions fell short of influencing political outcomes. He realized that ‚a slogan doesn’t threaten anyone‘ and that power might be more concerned with power than with the truth the protesters upheld.

This second epiphany took place just in time before a major success in the history of left resistance: The ministerial meeting of the World Trade Organization in Seattle, Washington. A huge amount of well trained people landed a major tactical coup with well prepared, well planned direct actions. They managed to change the world of IMF, WTO and World Bank meetings forever: Another World was possible.

However – as JMS writes – they were never able to repeat the tactical success of Seattle. The media began to report about ’summit hoppers‘ as a particular species, instead of identifying the major political issues that concern society as a whole.

JMS’s takeaway was to become better at political organising. He led skill trainings, wrote press releases and spent a lot of time building internal consensus in various political groups. More marginal distinctions rather than big divides. Esoteric debates and hours of discussions about the exact wording of a mission statement. Why, he asked himself, are we spending so much time in defining who we are instead of doing practical work? He sensed that ‚having the right line‘ was apparently more important for them than ‚making measurable progress‘. He began to understand that he traded the ‚unquestioned truths‘ of his hometown – ‚doxa‘ as he writes – for the ‚doxas‘ of his affinity group. The political groups were trying to become (or stay) the ‚righteous few‘ instead of gaining political momentum. Why, JMS asks himself, did he spend so much time to some self-declared ‚activists‘?

In the following pages JMS tells us that the term ‚activist‘ in its current meaning is a relatively recent invention and that it isn’t helpful in building succesful political movements. On the one hand it let’s everyone else off the hook, because the activists already are doing the dirty work. On the other hands it helps to depict ‚activist‘ as particular individuals with individual goals and drives the attention away from society as a whole or the structural issues society is facing. So his advice is to abandon the ‚activist‘ label and even go further:

„It is much more important that we break out of the contained cultural niche that the label has prescribed; that we also abandon a make-believe world of activism in favor of strategically engaging in the terrain of politics.“

On the last pages of the first chapter JMS dwells again on the importance of understanding that ‚right does not equal might‘. He wants his reader to gain ‚knowledge of political strategy‘ instead of explaining over and over again ‚what is wrong with a social system‘. Good ideas are NOT sufficient.

„As such, Hegemony How-To is also intended as an apologia for leadership, organization, and collective power, a moral argument for its cultivation, and a strategic discussion of dilemmas that challenger movements must navigate in order to succeed.“

In the next chapters JMS is going to clarify his talking points by explaining particular events, thoughts and idiosyncrasies that he observed during the Occupy Wall Street interventions.

In our discussion we focused on some core concepts identified by JSM. His concept of ’story of the righteous few‘ reminded us of some religious parallels we experienced during our political work. Sometimes what we did or still do felt/feels like a sacrifice with little connection to our everyday lifes. As a matter of fact I personally was fascinated by DiEM25 groups because they allowed me to talk about issued that apparently had no space in my family and at work.

We talked about promising social spheres in Germany, where it might be possible to ‚weave politics into the fabric of everday life‘. There are underestimated potentials in Christian groups and according to one of us they currently have much more potential for actual change in e.g. Germany and France than most political groups. They even managed to buy a ship to help rescuing refugees in the Mediterranean Sea. We asserted that most political groups, including DiEM25, do not fit the minimum requirements of a movement.

Afterwards we discussed JMS’s rejection of the term ‚activist‘. Is the label still useful? It sure evokes some stereotypes. We agree with JMS that it seems to be a relatively new word with a lot of not helpful meanings. „Activist“, said one of the participants, „are people that go to a demo and make a photo of themselves being there.“

Especially the fact that ‚activism‘ often appears to be a life-changing demand can be problematic. As a political group o organisation you should be able to offer different ways to get engaged for common people that have a lot of different commitments in their respective communities. It shouldn’t have to be a sacrifice to do political work.

As political organisers we ought to offer a hand for people to join a movement or a cause. Offer a feeling of purporse and belonging. A sense of agency. Instead of being a think-tank that doesn’t pay its workers or pyramid scheme without a material product.

We’ll agreed to meet again in about 3-4 weeks.